Well, last week Jack was finally feeling better.
And I was thankful because he had a field trip to a wildlife refuge and I was able to go too.
He woke up in a good mood. I made him eggs and toast for breakfast, packed him a good lunch
and off we went.
I , of course, road on the bus with another kid because Jack wasn't feeling like sitting with the M-O-M, but it was still nice.
Did I mention Dad was home with the little guy because he was pretty sick at this point? 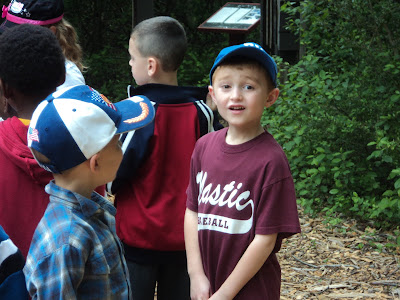 We were only there for 30 minutes or so- enough time for me to snap these 2 pictures, when he came up to me moping.
I thought he was bored.
Then he started asking for water.
I hate being one of the only moms on a school trip and giving something to my kid that the other kids can't have because their moms aren't there- but I figured he was just real sick the week before, let me give the kid some water.
As I reached down into my bag, I felt Jack slide down my leg and drop to the floor.

I was thinking he was fooling around, but when I looked at his face, I could see his eyes looked weird and I knew he had fainted.

I got down on the wood chips we were on and sat with him, giving him sips of water, but he still seemed out of it.
Another parent realized what was going on and called one of the teachers.

The teacher said we had to call the school nurse. 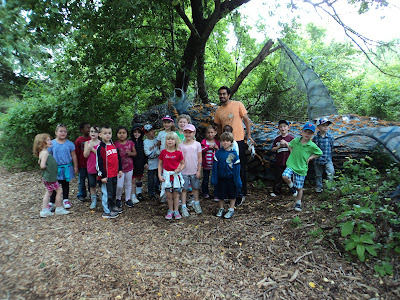 The school nurse wanted us to call an ambulance.
I didn't want to, thinking they would want to give him an iv and take us to the hospital- I thought these things unneccessary.

But, Jack was still out of it.

I called the husband and asked him to come and pick us up.
I was cool and collected, but when I called him I started to cry. I just felt so bad for Jack - he was so sick the week before and now he fainted on the field trip he had looked forward to.
The husband quickly put the (sick) little guy into the car and came to pick us up.

I called my pediatrician as we sat on the floor.
She said to lay him down and elevate his legs.
She told me he should "come- to" in about 5 minutes and then bring him in.

Guess what?
It worked.

Jack looked a lot better and told me he was hungry.
We got him off the ground and gave him his lunch.
It takes about 30 minutes to drive from our house to this wildlife refuge.
So we waited.
The husband came much quicker than I thought and we got into the van.

Jack was eating his food quickly.
But,
the little guy didn't look so good.
He had high fever and looked like he didn't want to be in the car.

yeah, so
he threw up all over the van.
like big time.

Thankfully, I always seem to have old clothes that I am giving away in my trunk.
I climbed back and got him cleaned up all while the husband is still driving so we could bring Jack to the pediatrician to get checked out.

We get to the doctor, and the husband stays in the van with a sickly little guy and I run in with Jack.

My poor husband had to sit in the van with the windows closed cuz the little guy was chilly.

They checked out Jack and he was fine.
A little dehydrated, but fine.
It must of been a mixture of that, being hungry, still getting over being sick and being hot outside.

We went home, Jack played, the little guy went on the couch with a cold washcloth on his head and some tylenol and I cleaned the van. for. hours. and. hours.

Don't worry, I think this week will be better.
::wink::