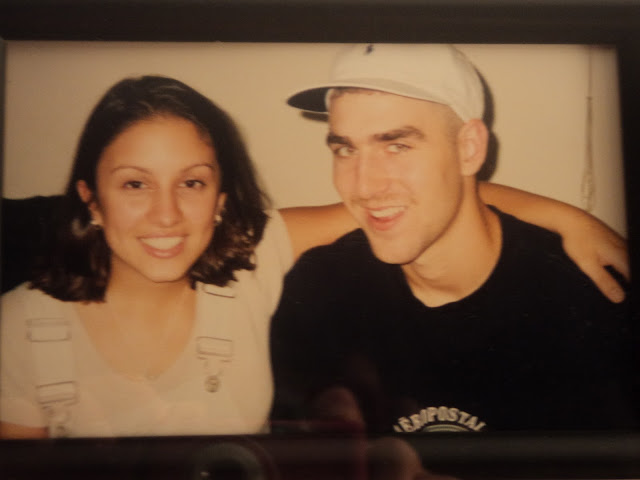 Our anniversary is this week.
13 years!
Excuse the picture, but I had to stand on the couch and take a picture of a picture through the frame, because.....
yep...
you guessed it- that's how I roll!
And I am wearing overalls- they were cute at the time, but I guess anything is cute when you are 19 and in love.
And the husband is wearing an Aeropostale shirt- my tween daughter never believes that we shopped there first.
And his beloved Polo hat, that whenever he sees it in a picture, he asks, "what happened to that hat?"

When we were 13, we would talk on the phone for hours and used to joke about getting married.

We said we would name our son, "Warren".
Then when we were 19 we joked we would have 4 kids-
okay- at that point he was probably joking and I was dreaming.

And then we really did have 4 kids, but none named Warren.
The other day we realized our son was calling our daughter, "Warren" because it was the only way he could say her name, Lauren! Yeah, so maybe, not as amusing to you as it is to us. But, special
nonetheless.

I can't believe how challenging and hard marriage can be, but so glad and thankful we stuck it out at so many points.
I can't imagine life any other way.