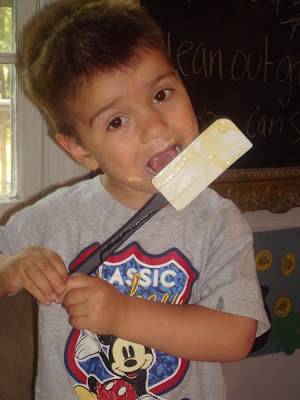 This little guy is too much! The other day we were making a cake for Daddy and I realized he was just standing there in awe as I mixed the cake with the hand mixer. "Want to help?", I asked. He was shocked and excited.... Am I that strict that he thought I wouldn't let him use the mixer?

After the cake was in the oven, I realized, I don't think he knows that you can lick the batter left in the bowl.
I offered him a lick and he gladly had some, and then asked for another lick, and then another and so on. 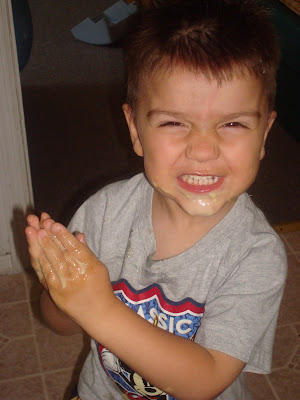 I looked at the little guy and asked him why he had batter in his hair. He is not the type to go crazy and I wouldn't have thought he would stick his hands in his hair.
And I was right, he didn't.
He STUCK his head. in. the. bowl!
The apple doesn't fall from the tree.
Or rather...
The batter doesn't fall far from the bowl.