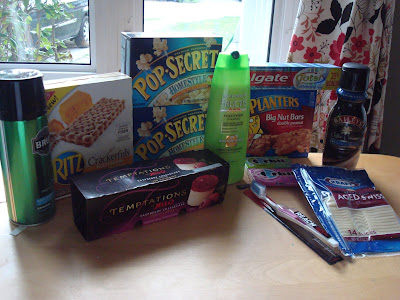 I had a good deal of coupons, like I told you about here.

So, my eldest and I took the little guy and headed off to get some free stuff.

It wasn't what I thought for a number of reasons.

I had a baggie with $1 off coupons for items I felt would be $3 or less, so we would get them for free.

I didn't have a list- which would of helped. I just came up with the idea to take advantage of this sale at the end of last week and then finding the time to go proved to be hard.

Since, it isn't a store we normally go to, my daughter and I walked around a lot, looking for items.

So I ended up with the 13 items you see up above.

A lot more than I had anticipated.

I figured out that we used one more coupon than the limit of 10 and that was our fault, but we can't seem to figure out about $3 in the bill.

I did buy a couple of items that were over $3, like the deodorant that was $4.19 and with the coupon brought it to $1.19. I knew it was something we could use.

When the cashier told us the price, it was too much for me to ask him to explain the receipt and the store was mobbed.

I was happy with the non-food items- deodorant, toothpaste, a toothbrush and the shampoo, but probablly could do without the snacks.

And that new jello temptations is GROSS. At least it was free, I guess.

I will still cut coupons and save when I can, but I wouldn't call this small trip a success.