Simple Times at The One Room Schoolhouse

We visited a one room schoolhouse, my daughter and I, for a field trip.
And it was COLD- seriously cold. So cold that I wore leggings under my jeans!
And I am not one to wear so many layers! There was unexpected snow here on the island and we had to drive in it, but, praise God, it was okay.

The school was so neat and from the late 1800s. It was small and had 2 doors, one for girls and one for boys. 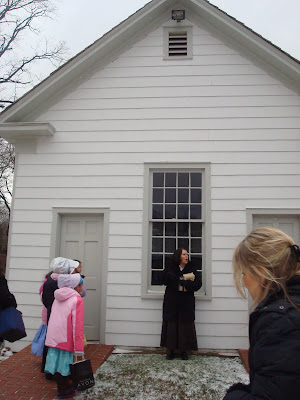 It was only heated by a wood burning stove. I sat in the back and froze until I realized the kids were warmer closer to the stove. The museum "teacher" taught the kids all about the schoolhouse and gave them a lesson they would of had in 1880. 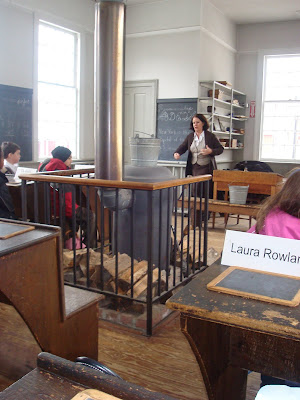 The kids had to do a chore much like the children of the times. They had to saw a log using a "bucksaw" . They dressed up from that era or tried to - this seemed especially hard for some of the boys- one boy wore suspenders and then upon realizing no one else had, he never took his coat off, all the while thinking of how upset he was with his mom for making him wearing said suspenders. 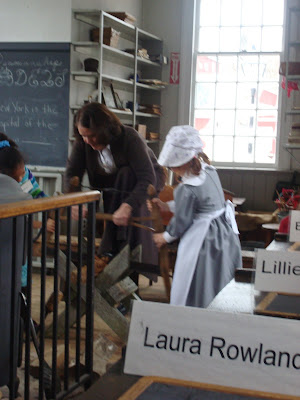 The kids each sat a desk for 2 and sat by a name tag of a child that actually went to school there in 1895. The kids thought this was great fun and my daughter continued the little game well after we returned home- not fun for a mama who needed the table set pronto and couldn't get her daughter to come by calling her by her birth name! 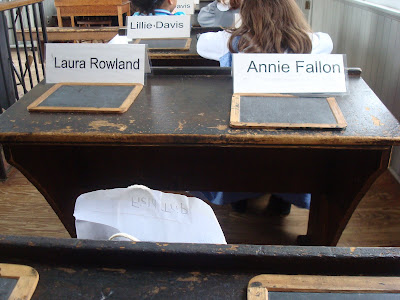 The class was so simple and of course, it made me want to return to simpler times. Imagine that the kids woke up early, maybe even 5 am, had farm chores to do, walked about a mile or so to school to be there by 8, stayed there till 4, and then walked home, only to most likely have more chores awaiting them at home. They did this in the winter! School was always during the winter and the summer, to avoid planting and harvest. I saw this poem on the board and thought it applied to me and my life even more than it applied to the children. 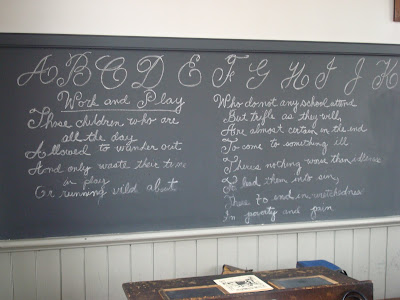 Work and Play
Those children who are
all the day
Allowed to wander out
And only waste their time
in play
or running wild about
Who do not any school attend
But trifle as they will,
Are certain in the end
To come to something ill.
There's nothing worse than idleness
To lead them into sin,
There to end in wretchedness
In poverty and pain. 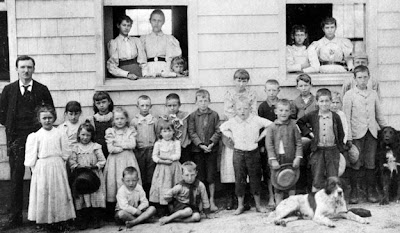 My daughter was Bessie Freeman for the day and that would make her the taller of the 2 girls with the folded arms. Notice the bare feet and the "class dogs".