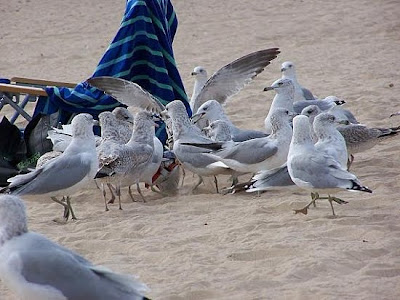 Ok- so this is not my picture, but this is what my blanket looked like at the beach the other day.
We decided to go to the beach at 3 and we stayed to about 7. It was great- no packing lunch, the baby didn't need his pack and play for a nap. We carried so much less in. When someone needed to go to the bathroom, we all took the walk to the restroom area and came back to a scene much like the picture above.
We bought pirate's booty (a healthy kind of cheese popcorn) at the store the day before because our friends had shared some with us and the kids remembered how much they liked it. Boy, was it expensive!
As we walk up to the seagulls they scampered off, leaving the evidence- the bag of pirate's booty half eaten!
They had gone into our beach bag and pulled out the brand new, unopened bag and pecked at it until it was open.
My kids wanted it so badly and asked if they could eat the rest. I almost said yes, because I am so the mom who does the 3 second rule and eats stuff off the floor. But, I had to say no to a snack that might have bird slobber on it.

You might be wondering how I knew how the birds got the bag.
A woman came rushing off to me to tell me that she watched everything and she had a great laugh, but she couldn't do anything to help because she doesn't believe in touching people's stuff.

So I was a little cranky and felt like saying, "Oh- do you believe in watching and then just letting me know that birds ate our expensive snack?", but of course I just smiled and laughed.
It is just one of those stories that is pretty funny now, but not so funny when the kids are complaining that they really wanted to eat that pirate's booty and they don't want the goldfish pretzels that I had also packed. Why do I buy those things anyway?


The Etsy August Giveaway has low entries and ends soon!