So, I Had My Baby In The Bathroom 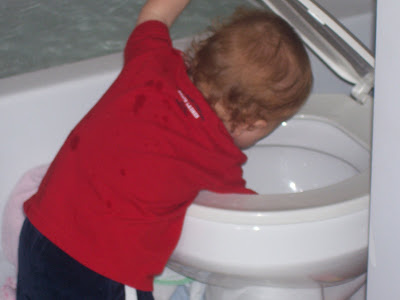 I have had 5 great pregnancies and 5 wonderful birthing stories, but one will always stick out as different, but just as special as all the others.


We had 2 girls, which I was thrilled with and never thought we would have anymore. My husband was happy and we lived in a small cottage of a house with 2 bedrooms.

Life was good or so we thought... Then in the winter I was ill. A friend suggested pregnancy. I thought no way. But as is so often the case with women who believe they are simply sick with the flu- I was pregnant. I was so happy, but in the back of my mind was thinking what will the husband say? I thought he might walk out the front door, so I braced myself.

I told him and he kind of laughed, but was fine. I told him what I thought would be his reaction and he responded, "Where would I go"? We were very excited and we decided not to find out what we were having, since we had found out with the first 2. As I was nearing the end of the pregnancy, my doctor advised that I be induced early. He said the baby was large and he didn't want to see me have a hard time delivering. He gave me some dates that were 10 days before my due date and I said no!

I figured I had already done this 2 times and knew what I was talking about. I finally agreed on 1 week before. I was a little sad, because I knew my mom was going to care for the girls and would probably not be able to hold the baby right away.

I was also praying that this baby would touch my husband's heart and draw him closer to the Lord. The day before I was to be induced I met with some of my close friends to discuss our church's Moms group. We happily discussed my upcoming birth and someone talked about home birth.


I had said -not interested! I said I had to clean my bathroom before I went in and the girls told me to let it go and then I said - no it is pretty bad. We left and I went home to clean and pack up the girls for my mom's house.

I suggested to my husband that we let the girls sleep over my mom's house that night so we wouldn't have to get up early with them and then drive them to my mother's. To which he replied... (Brace yourself- you're not gonna like it) "Why, ... what do you have to do, but lie in a bed?" All I thought was AHHHHHHHH- Why me Lord? Doesn't he know what giving birth is like?

My husband was great in the delivery room- he cut both girls' cords and was wonderful, but why oh why did he say that? Late at night, my husband was playing games on the computer while I cleaned the bathroom. It took me awhile, but finally at 11 it was done, I put a clean towel on the bar and went to bed.

My husband stayed on the computer awhile longer and he went to bed. At around 1am, I woke up with terrible pain. I thought, wow - I really have to use the bathroom. I think all women still have that fear of going to the bathroom while giving birth. So, I figured this is great. I'll go to the bathroom and all will be well for my induction. I went and the pain just kept getting worse.

Finally, after squating and walking from room to room in pain, I woke my husband, who had only been sleeping for about an hour. He pet my arm (I hate arm petting!) and told me it was only early labor and to go back to sleep. To say I was mad was an understatement. I don't remember what I said and I hope it wasn't too bad, but whatever I said got him out of the bed. He looked at me funny and said, "Let's call Dr. Mark". Well, Dr. Mark was already at the hospital which is about 40 minutes from our house. He said, "Come right away".

We called my mom (for the girls) and she said she would be right there. Then as I was still in terrible pain, my husband proceeded to pack my bags and get my pillow. The pain got so bad, but I still thought I had to go to the bathroom.  I went in to our little bathroom and told my husband, "I just need to push"! He looked at me with a strange look and just said, "DON'T"!